Divorce is epidemic among modern Western peoples. This is not news to anyone.

"Children of divorce are twice as likely to be abused and to become criminals and teen moms -- even if they have stepparents. And divorce doesn't end fighting in front of the children -- in most cases, it escalates it!"

"A 1991 Justice Department survey, for example, found that more than two-thirds of domestic violence offenders were boyfriends or ex-spouses, while just 9 percent were spouses. Cohabitating women, according to one review of the literature, are four times more likely to suffer severe violence than married women."
Gallagher in "End No-Fault Divorce?" (Maggie Gallagher debates Barbara Dafoe Whitehead) in First Things 75 (August/September 1997)

And it seems to be self-perpetuating, like a genetic disease. Children who live in a divorced home are much more likely to become single parents, either through divorce or out-of-wedlock child-bearing. And this is much more pronounced if the children are exposed to divorce during their teen years.

'Exposure to single motherhood at some point during adolescence increases the risk [of a daughter's later becoming a household head] by nearly 1 1/2 times for whites and.....by about 100 percent for blacks.' " Sara S. McLanahan, "Family Structure and Dependency: Reality Transitions to Female Household Head ship," Demography 25, Feb., 1988, 1-16. Cited in Amneus, The Garbage Generation, page 240

The suffering not only of women and children, but of the husbands and fathers in these divorces is staggering. The cost of supporting these broken impoverished, embittered families is becoming more than the fabric of our society can bear, and society in itself does not have the answers. Even the liberals realize it.

"[Non-nuclear families can work, but] every society requires a critical mass of families that fit the traditional ideal, both to meet the needs of most children and to serve as a model for other adults who are raising children in difficult settings. We are at risk of losing that critical mass in America today." Hillary R. Clinton, It Takes a Village, p. 50

Visionary reformers on all sides of the political spectrum are working to reform divorce laws to remove the incentives for couples to divorce as soon as life together looks less than rosy. The trouble is, laws cannot change hearts.

Someone is going to have to be willing to suffer for righteousness' sake. Living in intimate circumstances with a fallen spouse as a fallen spouse is unquestionably the most difficult thing we could be asked to do - even in the best scenarios. Poster-children for the horrors that can happen in marriage situations abound. Well-meaning political saviors use them liberally to weaken family institutions every day.

But where are the poster-children for the beauties of perseverance in difficult marriages? Where are the mothers, ferocious to save their children from a future of abuse, brokenness and poverty? Where are the fathers who will sheild the women and children under their protection from the dragons of divorce, at their own peril? Battered by the brutalities of fallen men, ridiculed by the rhetoric of self-actualization, they give up the struggle - and divorce.

"In the middle of difficulty lies opportunity."~ Albert Einstein ~ The battle to defend marriage and family is one of the greatest difficulties of our time. Yet most of us only see the blood and smoke. We cannot or will not see past the warfare to the peace we might purchase for our children and grandchildren. And those who do see it rarely have the courage or fortitude to see it through in their own marriages.

I have a dear friend whose husband is mentally ill. He is manipulative, unfaithful, verbally and psychologically abusive, and completely oblivious to any needs but his own. She makes no excuses for her husband's behavior, and tries not to soften the consequences of his destructive choices, except where they will hurt others.

Many have asked her why she doesn't just divorce the jerk. She says, " I have seen what divorce does. My husband is the way he is in part because of the abandonment he felt in the multiple divorces of his parents. There has never been a divorce among my forefathers. I will not be the one to let it in."

She has seen a strong opportunity in her suffering. She has decided to stop the ravages of divorce in the next generation of her descendants, as far as it is possible for her to do. She is willing to suffer to achieve it, but not as a victim. She has chosen this in the midst of legal and ecclesiatical freedom to divorce.

And have her children suffered as a result? Oh, yes. But who escapes suffering? Not those children of divorce. We do not have the option to escape suffering, we only have the opportunity to decide what to do in the suffering.

Interestingly, all of her children have chosen to marry. They have persevered not only in a strong faith, but through several years of marital difficulties of their own.

Trends are made quietly, one personal decision at a time. Will you see only difficulty in your marriage? Only victimization? Or will you see opportunity? And what will you choose?

Also visit the Christian Carnival for other essays on various topics of interest to those of Christian persuasion, at the Wittenberg Gate on Wednesday, August 16th.
Posted by Kim Anderson at 8:20 AM

Wow....that was an incredible post. Certainly something that I have never given thought to...at least not from this particular perspective. I thought you did an awesome job.

Great post. And a great reminder that in todays society of the turnstile marriage there is another way if you are willing to work at it. Unfortunately many in today's society don't want to which leads to more divorces and more problems. It's a vicious cycle that can only be broken one person at a time. Thanks for the wonderful post!

wow. As someone whose been on the edge of the big D, which through God's mercy and grace never happend. I can really relate to this. Thanks for your inspiration and time to post this.

As part of an outreach program to encourage families to attend church, we noticed a trend. Most of the individuals who no longer attended church or who had never attend church, did so due to a divorce. They stopped going to church after their own divorce or the divorce of their parents. The third group where children who grew up in homes with no religious training because their parents stopped going to church in their youth after the grandparents' divorce.

Amy, thank you for working through your pain! It is a decision that indirectly affects us all.

Janine, what an amazing result for your survey on church membership! I would not have thought that divorce would be such a huge factor in turning people away from the community of believers. What should the church's response be, do you think? Change focus to exert itself to repair marriages rather than to comfort those who have chosen to bail? Or?

Boy that's a hard one. I think the first step would be to promote a more sacred view of marriage. The modern view of marriage brings to mind romance and pleasure, not covenants and commitments.

Marriage is supposed to stretch us and help us grow spiritually. It will undoubtedly be uncomfortable as we wear off our rough edges and let go of the inherently egocentric self as two become as one.

On a personal note, I had no idea how selfish I was until I got married and had children. Even though my husband and I did all the "right things" like attending church regularly, observing a formal courtship, taking the marriage preparation class at church and doing pre-marriage counseling with a Christian counselor, we never saw it coming. When we got married, we both expected happily every after.

Wanted to clarify one point. We are very happy in our marriage, it is just that we never imagined that we would have to work so hard to do it.

I think you're right about people not expecting marriage to be a lot of work.

Kim, I wish to commend your friend for her perseverance and sacrifice. I do not detect that she wallows in martyrdom; she is unselfishly looking at the greater good for generations to come. May she be an example to us all, and may God richly bless her and her descendants. Thank you for a very well-written post!

Children who withness a parent verbally or physically abuse their spouse are being set up to perpetuate this behaviour and inflict this toxic behaviour on a whole new generation. If childern of single family homes are at risk for teen parenthood or incarceration, it is because of what they lived with prior to the divorce. If the writer lived with real abuse, this posting would have a completely different tone.

What Time Is It? Beating the Rat Race Keeping Time Thorns and Thistles There Is More

Homeschool Homicides & the Cult of Youth 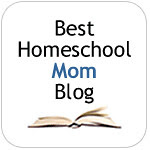 Kim Anderson
Archimedes said "Give me a lever long enough and a fulcrum on which to place it, and I shall move the world." My home is the lever, and God is the bedrock fulcrum on which it rests. From here I will be moving the world.